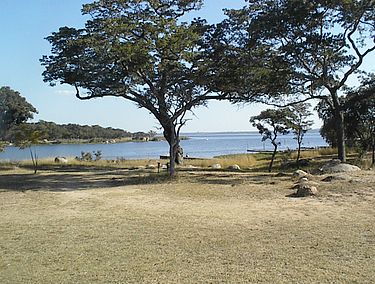 Lake Chivero is located southwest of Harare, Zimbabwe. It is a reservoir on the Manyame River. It was first known as Lake Mcllwaine in remembrance of Sir Robert Mcllwaine, a former judge of the High Court and the founder of Rhodesia’s (Zimbabwe) soil and water conservation movement. The length of the shore is 48km and the dam wall is 400m long. The lake was opened to the public in 1952 after two and a half years of construction, and the park surrounding the lake was deemed a national park at the same time.

The water at Lake Chivero is used for irrigation and commercial fishing. There are many varieties of fish in the lake: grass carp, tiger fish, black bream, African catfish, yellowfish, and green-headed bream. The lake was declared a Ramsar wetland of international importance on the 3rd of January 2013.

Lake Chivero Recreational Park is dominated by miombo woodland, creating food for browsers like the white rhino, zebras, blue wildebeest, impala, kudu, waterbuck, and Angolan giraffe etc., which are sighted in the park. It also harbors nocturnal animals like slender white-tailed mongoose, pangolin, aardvark, and several other species. For those that like bird watching, there are a variety of bird species, like the South African ostrich, fish eagles, and several others.

There are also rock painting sites, like the Bushman’s Point. After a day’s walk you can rest at one of the many self-catering lodges, chalets, and caravans on the South Bank. There is lighting and clean water in all units. The lodges include Sunbird, Stonechat, Hornbill, Fish Eagle, and Kingfisher lodges. The North Bank has The Msasa caravan and camping site which has a separate entrance. The facility offers braai stands, toilets, and hot and cold showers.

The game park covers 1867 hectares with a variety of game. It was opened in 1962. The game was introduced from Hwange National Park and some of the fish from Lake Kariba during a rescue operation called Operation Noah. A guided hike is available with a reservation. These are at least an hour per group unless it is an educational tour. You can also take part in horse riding, fishing, and boating.