Zimbabwean actress and activist born to Zimbabwean and Chinese parents as a refugee in Dares Salam Tanzania on the 17th of August 1977. Her given name Chipo means gift in the Shona language. She spent her first two years in refugee camps in Mozambique with thousands of young people escaping the war in the then Rhodesia. Her mother, Fay Chung, is an educationist and former Minister of Education in Zimbabwe and her father is Rugare Gumbo, who was once a member of the ruling party in Zimbabwe.

Chung was raised in Harare, attending the Dominican Convent High School where she developed her acting skills with the mixed-race theatre company Over the Edge. She moved to the US at the age of 18 with her mother who was working for the United Nations. At Yale University she first studied directing then trained as an actor at the Royal Academy of Dramatic Art (RADA) in London and graduated in 2003. She has done political theatre such as Talking to Terrorist (Royal Court Theatre), the Overwhelming (Royal National Theatre) and Fallujah (In which she played Condoleezza Rice) as well as classical plays such as Phedre, in which she performed with Helen Mirren (Royal National Theatre and Epidavros).

Chung has appeared twice in Doctor Who, in one episode playing the Master’s assistant Chantho and in another a character called the Fortune Teller. Her first film credit was the voice of Icarus II in Danny Boyle’s “Sunshine” as well as appearances in “In the loop” and “Proof”. Other television appearances include the drama “The Last Enemy” and as a reporter in the Sherlock second series episode “The Hounds of Bakersvile”. In 2011 she had a recurring role as Vivian in the romance drama series “Camelot” and in 2015 she appeared in the British TV series “Fortitude” as Trish Stoddart. In the same year winning the role of Mary Magdalene in the TV series “A.D The Bible Continues”.

Chung, alongside Nick Reding, founded the charity SAFE-Kenya which develops theatre for social change in Kenya focusing on HIV education and abolishing clitoridectomy and currently sits on its Board of Trustees. She also works closely with the charity Peace Direct in support of Envision Zimbabwe a women’s trust that works towards consensus-building and peace in Zimbabwe. She also has a seat on the RADA Council and British Equity’s International Committee for Artists’ Freedom (ICAF). 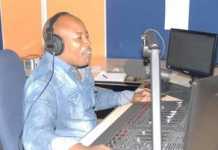