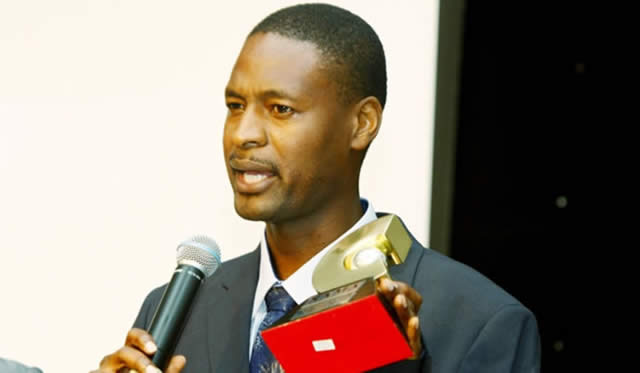 Enock Chihombori is a Zimbabwean artist who was born in Lusaka Zambia in 1971 but later relocated to Zimbabwe in 1981. In secondary school, Enock never pursued art as a subject, joined a school group called Shona Culture Club which got him involved in various cultural activities which included what were to become his passion; drama and acting. In form 6, Enock developed a cartoon character called Gringo, which he drew for a local vernacular paper, Kwayedza. He also occasionally did cartoons for various other publications.

After school in 1991, Enock went straight to work. As he was pursuing his professional career, Enock never stopped drawing cartoons for various newspapers, magazines and newsletters. One cartoon that kept him very busy was the Gringo cartoon that he was doing on a weekly basis for Kwayedza. By 1994, people were urging him to produce a cartoon book for this Gringo character. He tried to do so, but he had a tough time because publishers were telling him that Zimbabweans do not have a culture of reading cartoon books, let alone buying them. Enock realised that the other problem was that the cartoon character Gringo was not well known to people who did not read Kwayedza. He then decided to give Gringo more publicity by having him on TV.

Enock immediately set about putting ideas together for a long running drama series. His biggest challenge was that he could not write scripts. So he thought he could take his ideas and give them to a prominent writer who had the experience. In 1996 he approached one of Zimbabwe’s well known writers Mr Charles Mungoshi. Mr Mungoshi introduced him to what script writing is all about and urged him to learn how to write himself. From there he made several unsuccessful attempts to come up with a plausible script.

In 1997 Enock Chihombori joined an acting club called Screentalent. Here he got to meet some of the country’s prominent and well known actors. This club’s main objective was to teach and encourage various forms of art including acting, dancing and at times singing. The club also helped actors find acting jobs from various production houses. Here Enock learnt skills on how to act and gain knowledge of what is expected from actors. The club Chairman, Mr Yanai Tsvuura gave him old scripts from which he taught himself how to write. With the expert guidance of Mr Tsvuura, Enock managed to write his first Gringo script. At the end of 1997 Mr Tsvuura referred him to then up and coming ZBC producer/director, Dorothy Chidzawo. Chidzawo did not take time in accepting the script. She wanted to work on a comedy and that script was ideal for her.

In early 1998, an actor by the name of Lazarus Boora was identified to play the leading role of Gringo. Gringo the comedy drama series was produced that year by The Zimbazbwe Broadcasting Corporation (ZBC), with Dorothy Chidzawo as the director. By mid that same year, Enock managed to have a Gringo cartoon book published. It was titled “Gringo auya”. This is the same year that Enock’s professional career also took a big change when he moved from Cochrane Engineering to Airflo Fan Engineers. Gringo the TV drama series became an instant hit with Zimbabwean viewers. The lead actor Lazarus Boora became a star. The majority of the actors in the series became popular as well. Actors like the late Collen Dube (who acted the role of John Banda), William Matenga (Gweshegweshe) and the late Stembeni Makawa (Mai Gweshegweshe) gained immense popularity. Enock himself played the role of Toby Waters, which exposed his previously untapped acting abilities. As soon as the series was over, there was an immediate demand for a sequel. So, in 1999 Enock wrote his second Gringo script titled “NdiGringo chete”.

Gringo was now established as a household name on Zimbabwean television. “NdiGringo Chete” was the first and last series in which Collen Dube featured as John Banda. The talented actor passed away in a swimming pool incident that shocked many Zimbabweans. His loss dealt a heavy blow to the Gringo series as he was one of its major stars. Enock was devastated. He recalls that, at that time he was having talks with the Gringo producer/director Dorothy Chidzawo to have a script written with John Banda as the main character. Collen Dube passed away without knowing what was being planned for him.

Due to other work commitments, in 2000 Enock decided to stop producing Gringo cartoons for Kwayedza newspaper. It was a difficult decision for him to make as he felt he was letting down readers who had followed the cartoon strip for more than ten years. Nothing much happened on the filming scene for him that year other than putting together ideas for his next script. In December he got married to Noreen Kariwo, a girl he admired since the days he started working.

The year 2001 was probably the busiest year for Enock Chihombori. He wrote the third instalment of the Gringo series. This one was titled “Gringo Ndiani”. This time, ZBC’s Arnold Shoko took over from Dorothy Chidzawo as producer/director of the series. Shoko continued with the same standard of good work Chidzawo had set. This is the story in which another star was born. Blessing Chimhowa came in featuring as the ever humorous Mbudziyadhura. The same year Enock wrote an action story based on boxing. This was probably the first action drama series ever produced by ZBC. The story was simply called “Cobra”. It was also directed and produced by Arnold Shoko.

The following year (2002), the major event of the year for Zimbabwean artists was the inaugural National Arts Merit Awards (NAMA) which was staged in Harare. This is Zimbabwe’s premier event in which excelling artists and their works are honoured. In the Film and Television category, the drama series “Gringo Ndiani” came out dominant. It won the Best TV Drama Series award. The main actor Lazarus Boora won the best Actor award. Enock Chihombori won the Best Film and Television Script writer’s award. The end of that year saw Enock write two short stories on Gringo to celebrate the festive season. One was titled “Gringo – Christmas presents” and the other was titled “Gringo – Christmas Dinner”. The two stories were produced and directed by Arnold Shoko for ZBC. They helped cement the Gringo series’ position as one of Zimbabwe’s finest comedies and established Enock Chihombori as one of Zimbabwe’s best comedy writers. This same year his first daughter, Kimberly was born in September.

In 2003 Enock won his second NAMA award for Best Television and film Script Writer. The award was in recognition for his work on “Cobra”. Enock then went on to work on yet another rib-cracking Gringo drama script for a long running series titled “Gringo Mari iripi?” Again, this production was directed by the veteran film-maker Arnold Shoko for ZBC. Gringo’s popularity soared. It saw Enock being nominated for the third consecutive time for a NAMA award in the category of Best Television and Film Script Writer. This time the award was won by another writer.

In 2005 Enock struck a deal with ZBC and Shamiso Studios to write and help produce and direct a yearlong Gringo Drama series. The series was to be titled “Gringo Aripo”. Immediately he set about planning for the story and in no time that year he was already writing the script. Soon, with Shamiso Studios as the producers, shooting started on ‘Gringo Aripo”. Six episodes were shot and packaged before the deal between ZBC and Shamiso was unexpectedly cancelled. The drama that was supposed to run for a year was no more.

In 2006 he wrote a film script for Gringo titled “Gringo Ndini”. He managed to get a sponsor for the film and arrangements were promptly underway to start shooting. Rehearsals were conducted without any hiccups. Problems started when the final budget was drawn. The sponsor withdrew by indefinitely postponing the shooting. Soon Enock applied for funds from The Zimbabwe Culture Fund to produce a DVD compilation of Gringo short stories. He was fortunate to be one of the recipients of the first disbursement of the funds. He wrote and managed to shoot two stories, “Gringo-The Ring” and “Gringo-The Restaurant”. The editing for these stories was not completed as the funds ran out due mainly to the inflation which was beginning to eat at the Zimbabwean economy. That same year, Zimbabwe’s leading singer, Oliver Mtukudzi sponsored and produced a short film titled “Chipo Changu”. Enock Chihombori created and wrote the script. Mtukudzi’s son, the late Sam Mtukudzi played the leading role.

In 2007 Enock wrote another Gringo short story titled “Gringo-The Cake”. This story was produced by the record company Zimbabwe Music Corporation (ZMC). ZMC also helped finish the editing of the two short stories Enock had done the previous year, “Gringo-The Ring” and “Gringo-The Restaurant”. With these three short stories, ZMC produced a DVD compilation titled “Enock Chihombori’s Gringo Stories”. Due to the inflationary economic conditions of that time, the anticipated monetary rewards from the DVD sales did not materialise. It was a big disappointment for Enock. Matters were never made better by ZMC who insisted on processing royalty payments three months late. By the time the money was paid out, its value would have depreciated significantly. That same year Enock wrote a children’s story book titled “The Woodcutter”. It was published by Lleemon Publishers. The book went on to win a NAMA award for The Best Children’s Story Book for that year.

The rest of 2008 passed by quietly for Enock, as he settled down at his new workplace in Botswana. During his early days in Botswana he wrote a film script titled “Unlucky Guy” which is yet to be produced. There were no filming activities for him from that period all the way to 2011. With him being on the social network, Facebook, it did not take long for him to start communicating with people and the one strong message he was getting was, “when are you going to produce another Gringo?” At the same time his good acting colleagues, Lazarus Boora (Gringo) and Blessing Chimhowa (Mbudziyadhura) were always getting in touch with him and urging him to give them a Gringo script to work on.

Towards the end of 2011 he decided to work on an independent Gringo film project. He got in touch with Film Producer Lillian Chidavaenzi and set in motion plans to work on the project. By December an ensemble of actors was rehearsing the script “Gringo Ndini”. He had to dig deep in his savings for this project. Lillian and her Husband came in with a sizeable amount as well. Well known actor and film director Ben Mahaka came in as the director and also provided the filming equipment. A Harare advertising company, Nextpage Concepts, together with Harare Business man Mr Farai Manyonde also came on board to financially see the project through. An experienced filming crew of some of the best film-makers in Zimbabwe was set up by Lillian Chidavaenzi. The film’s title was changed from “Gringo Ndini” to “Gringo-Troublemaker”. Shooting commenced in January 2012.