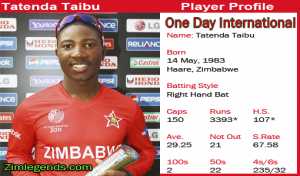 On 6 May 2004, he became the youngest Test captain in history when he captained his team against Sri Lanka, and is also the first black captain for the Zimbabwe national cricket team. Taibu made his first-class debut at the age of 16, and his debut for the national team in 2001, at 18.

In 2003, he was appointed vice-captain to Heath Streak on the team’s tour of England, and he was appointed national captain in May 2004, making him the youngest Test captain in history. He took a two-year break from Zimbabwe from 2005 to 2007 when he played a season as the captain of Namibia and another season for the Cape Cobras in South Africa. He made his return to the Zimbabwean side in a series against India A in July 2007, registering a century. The following month Zimbabwe hosted South Africa for a three-game ODI series and in the final game Taibu scored a career best 107 not out. It was the first ODI century by a Zimbabwean against South Africa.

During the period of the rebels, the country was left shaken up with a lot of high profiles leaving international cricket. In November 2005, Tatenda Taibu announced his resignation from captaincy and international cricket. Of all the high profile names that departed, none were felt so deep as Taibu; a home grown product, first black captain of the country, and a world class player.

In 2007, Taibu made a shocking return to Zimbabwe, a move welcomed by most in Zimbabwe. At the age of 29, Tatenda called time on his playing career saying that he wanted to put his full efforts towards doing the Lord’s work for his church. This meant an end of an 11 year playing career filled with highs and lows at such a young age. We are thankful to have been blessed by his presence and wish him the very best in what he called “his true calling”