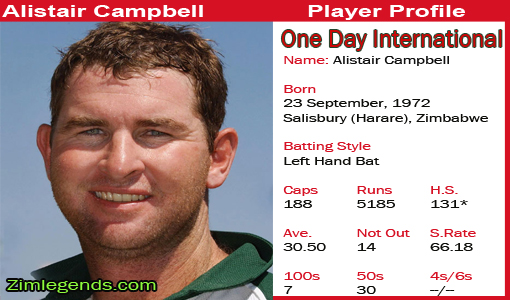 Now a chairman of selectors, Alistair Campbell first played for Zimbabwe on 29 February 1992 in a ODI against West Indies. The same year in October, he played his first test match, playing against India in Harare. He was selected for the national side while still at school, and becoming the youngest Zimbabwean to make a first-class century. Selected for the 1992 World Cup at only 19.

He soon became a fixture in the national side, and greatly impressed on the 1993-94 Pakistan tour with his aggressive style which proved very effective in one-day internationals, scoring three half-centuries. He scored his first century, against India at Nagpur in 2000-01, and followed that up with 103 the following summer against West Indies. Campbell plays a wide range of shots, generating power without apparent effort. He occasionally bowls right-arm offspin, and is a magnificent fielder in any position.

On taking over the captaincy in 1996, he led Zimbabwe to some notable successes including their remarkable series victory in Pakistan in 1998-99, and their qualification to the Super Sixes in the 1999 World Cup. He stepped down as captain after three years for ‘personal reasons. His last game for the country was in 2003, he was originally overlooked for World Cup but was later brought back to replace the injured Mark Vermeulen. After the sport faced some hard times in the country, in their attempt to revive it, they brought Alistair Campbell in the camp as the Chairman of Cricket Committee and the Chief Selector of the national team in 2009. 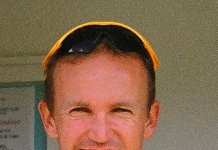