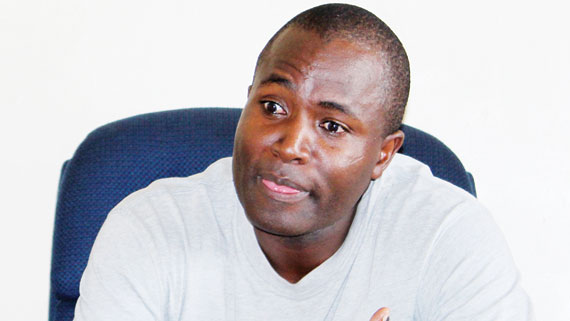 FAMED for his innate ability to find the back of the net, Agent “Ajira” Sawu had the fortune to turn out for the Warriors in two coveted eras.

First for the “Dream Team” that held its own against the continent’s most-feared national teams.
He later was an integral member of the Warriors’ in their first ever appearance of the African Nations Cup in Tunisia (2004).

Boasting a powerful physique and fierce shooting power, Ajira definitely knew how to rattle the back of the net with absolute ease.

His composure and ability to create chances out of nothing saw him become a celebrated icon to his teammates and opposition alike.

In over a decade of turning out for the Warriors, Sawu scored countless hat tricks but none of them better than his unforgettable solo winner in 1995, against the then high-flying Cameroon at the National Sports Stadium.

The Warriors beat the Indomitable Lions 1-0. Ajira struck the winner to send the NSS into frenzy.

A free scoring striker whose biggest attribute was his ability to play for the team, Ajira hardly hung onto the ball.

The leathal striker scored over a century of goals in his four seasons in the domestic league that saw him turn out for Zimbabwe Saints and Dynamos.

Growing up playing street football barefoot in Bulwayo, Ajira went onto honed his razor-sharp finishing skills in the Zimbabwe Saints junior side before being promoted into the first team in 1989.

He would become a household name at Saints scooping the coveted Soccer Star of the year in 1993.

In 1994 he moved to Switzerland were he turned out for SC Kriens, BSC Young Boys, FC Lucerne, FC Wil and FC Basel.
His most accomplished season was in 2001-2002 at FC Wil where he claimed the golden boot after raking 28 goals in 36 appearances.

Sawu would later move to the Chinese League One division at Chongqing Lifan FC for a season. After which he starred for Dynamos for one season.

He wound down his career in South Africa at the third tier side Durban Stars.
Ajira featured for numerous tension-filled Bulawayo derbies in Chauya Chikwata colours but the former Saints man says the once esteemed rivalry between his former side and Highlanders was now “a thing of the past.”

“We grew up in the same neighbourhood and back then you could feel the tension on Monday for the match on Sunday.

May be now it’s because three quarters of the players who turn out for these clubs are from outside Bulawayo.”

Ajira is however optimistic that the club he once played for and coached will mount a final assault and crawl out of relegation.

The former Zimbabwe Soccer Star of the Year is now part of the national Under-17 technical bench. He holds a UEFA B certificate and a CAF C certificate.