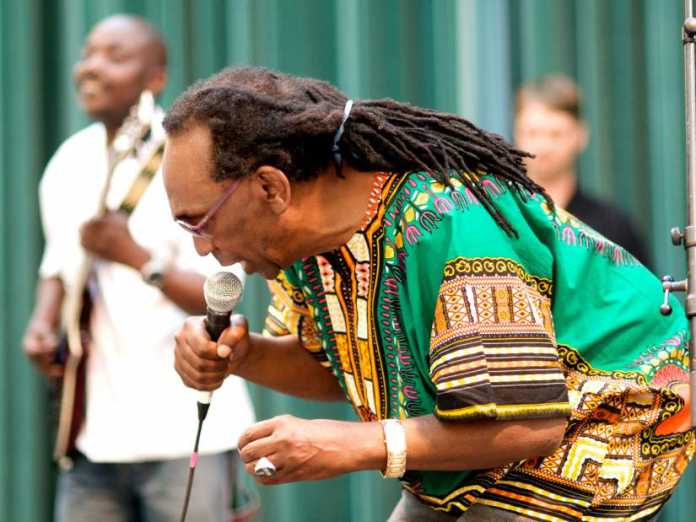 Also known as the Lion of Zimbabwe, Thomas Mapfumo is an unmistakable musical legend in Africa; the Bob Marley of Southern Africa some people say. He was born in Marondera where he lived up until the age of 10, then moved to Harare where he later discovered his passion for music.

Mapfumo fell in love with music at a young age listening to the trending music from America and Great Britain. He started singing at the age of 16 when he joined his first band called the Zutu Brothers. He jumped from one band to another playing covers of American and British rock and soul tunes until in 1972 when he formed the Hallelujah Chicken Run Band, where he introduced the innovation of adapting traditional Shona music to modern rock instrumental.

Mapfumo’s music incorporates the sounds of ngoma and mbira, with a his own easily recognizable distinctive voice with a slow-moving style. His music managed to pull a lot of Shona speaking people as it was seen as a political statement to sing in his native language. His lyrics became more political and supported the revolution that was developing in the rural areas. He then started calling his music ‘Chimurenga’, which means ‘struggle’; this was also a name of a previously revolutionary movement.

Prior to Zimbabwe’s independence, Thomas Mapfumo used his music as a way to encourage the Zimbabwean black people to join the war. He used the language barrier between the people and the white government to his advantage as the latter did not understand shona, which enabled him to spread his message without them truly knowing what message he was sending. However, they eventually caught up with him when he released ‘Hokoyo’, which meant ‘Watch Out’. The song was banned from the state-controlled radios and he was imprisoned for 3 months but the government was forced to release him due to large demonstrations.

Mapfumo performed at a celebratory concert which also featured Bob Marley after free elections were held in 1980. A new government was instilled, but in later years he would come to criticise the same government. Thomas Mapfumo truly had no boundaries or fear regardless of who is in charge, if he thinks there was corruption then he would let it be known through his music.

After Zimbabwe won independence in 1980, a lot issues were resolved and the country was fighting certain issues such poverty, this had now became Thomas Mapfumo’s concern; the well-being of fellow Zimbabweans. It was almost a decade after independence when he released the album Corruption in 1989. This album came down heavily on the Mugabe government, criticizing it and no longer showing the support he had done previously, Mugabe wasn’t happy and Mapfumo became the target of government harassment. He found his music banned again from the main stations in the early 2000s. This was an ironic situation because this was around the time when he received the honors of a doctorate for his contribution to Zimbabwean music, however; he had become a nuisance to Mugabe’s government.

Due to the ongoing clashes with Mugabe, Thomas Mapfumo is forced to live in exile in the USA but continues to make Chimurenga music and consistently talking about the struggles he went through, as well as the political struggles in the country.