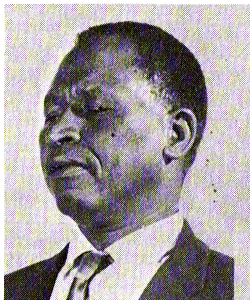 Ngcebetsha was a politician involved in the liberation movement. He was the first Secretary General of the African National Congress (ANC). Born in South Africa he joined the Presbyterian Church while he was studying to be a teacher. At the end of his studies he was chosen to be part of the group that was going to teach in Rhodesia (now Zimbabwe). He was posted at the Ntabazinduna Presbyterian Church Mission School (later known as the David Livingstone Memorial Mission). Ngcebetsha taught there for some time before joining the Department of Native Affairs.

Before entering politics in the 1940s, Ngcebetsha went into private business in Mzilikazi Township in Bulawayo where he had a grocery store. He was an editor of the African Home News between the years 1953 and 1965. In the same years he was an active official in a football organization based in Bulawayo where he had a role in the formation of what is now Highlanders F.C. He was the chairman of the Township Advisory Board and of the African Welfare Society for some years.

He served as a national councilor from 1962 in the Zimbabwe African People’s Union (ZAPU). Following the split within the party, his loyalty was with the group that formed the People’s Caretaker Council (PCC) with Joshua Nkomo. However, he was involved in the deliberation to bring a united front and when ZANU and ZAPU merged he was elected its first Secretary General in 1971.

In 1972 he was arrested by the Smith regime. Released in 1975, he died two years later in Bulawayo.