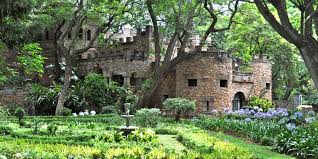 A 20th century neo-gothic castle near Bulawayo. Formerly known as Holdengarde Castle after Theodore Holdengarde who built it in the 1920s. He was a businessman and the mayor of Bulawayo in 1938 and 1940. Holdengarde was inspired by medieval romanticism.

The castle was taken over by Theodore’s son, Paul, after his death in 1947 and his wife’s in 1967. The Castle had fallen into disrepair but Paul renovated it. Failing health and old age hindered him from maintaining his castle and he failed to protect it from squatters, Satanists and arsonists who burnt the reception hall in 1974. In 1988 he sold the Castle to a Chiredzi business man, Digby Nesbitt, who renovated the place, turning it into a luxury hotel. It was reopened in 1990 and renamed to Nesbitt Castle. The Castle was closed in 2017 for renovations following bad weather. There is a private cemetery for the Holdengardes onsite.

In 2019 when I last visited this luxurious hotel and event location it was still exquisite, with beautiful greenery and scenic views. The ambiance is that of a medieval time and one would expect to be welcomed by jousters and royal guards. The beautiful statues of griffins and other weird extinct creatures take you on a mystical journey back in time. The Castle is now used as a wedding venue and business conference centre.