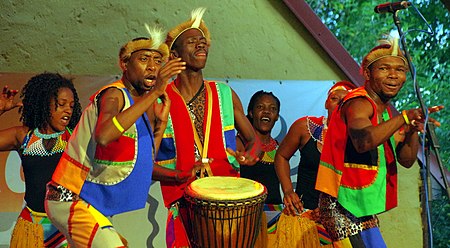 A Zimbabwean dance group that is based in Bulawayo. It was started in 2001 by Nkululeko Innocent Dube as a drama creative group at Mpopoma High School in Bulawayo. It later became a professional platform for young people who have an interest in Arts and Culture. IYASA is an abbreviated term for Inkululeko Yabatsha School of Arts which means Freedom of the Youth. The dancers’ costumes vary from traditional Ndebele attire to modern clothes. Their dances also incorporate both the traditional and the modern. My first experience seeing them perform was at my uncle’s wedding, the ambience they brought to the venue was magnificent, no wonder they are known all over the world.

The group is known in many countries and they have toured in the Czech Republic, France, Spain, Australia and Austria among others. IYASA was nominated for the 2013 Belgian Young Audiences Musical Awards (YAMA) for their play called “Sleep Well Sweet Moon”. In the same year some of the members, Noma Mkhwananzi, Silethemba Magonya and Pespise Magonya appeared on New York billboards.