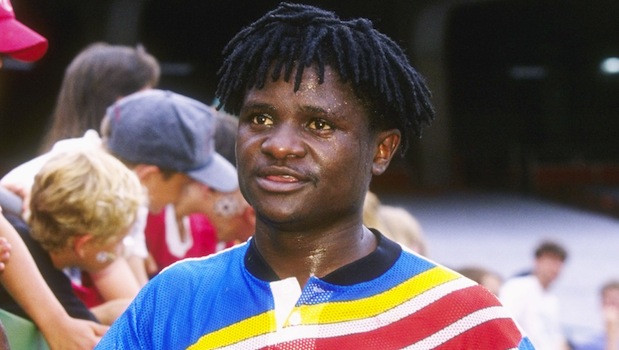 Vitalis Takawira who is now a retired player used to play as a striker and attacking midfielder. He started his career in 1989 playing for Dynamos where he was top goal scorer for five seasons. In 1994, he was the top scorer for five seasons in the Zimbabwean First Division three times and won the African Golden Boot. By 1995, he was transferring to FC Winterthur in Switzerland before he finally moved to Kansas City Wizards in the MLS of the United States.

Vitalis Takawira had a great start to his MLS period, scoring in his first game of the team: the goal was the first goal for the Kansas City Wizards in the MLS. He went on to make 110 appearances, scoring 29 goals, before he moved to the USL team Milwaukee Rampage in 2000. After a four year period with the team, 70 appearances and 39 goals for, he moved to Milwaukee Wave united where he ended his career.

After goals, he would often celebrate with the Digital Crawl, where he would get down and walk on all fours as teammates joined in. For Zimbabwe, Takawira played from 1992–1999 and scored 12 goals in 26 appearances. Some of these goals include the wonderful hat-trick against Cameroon. In an interview with The Soccer Insiders, Vitalis Takawira said the hat-trick against Cameroon was his proudest moment in football.