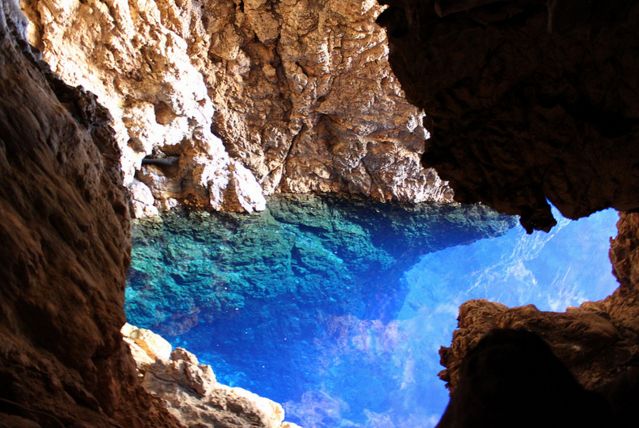 The breathtaking Chinhoyi Caves are in North Central Zimbabwe in the Makonde District, 9 km from Chinhoyi and approximately 115km from the capital City Harare. They consist of a complex structure of tunnels, dark caves and an astounding pool.
Myths such as ‘if you liter in the cave or break a branch from a tree in the cave, you will go missing’ have been said many times. No one really knows how true this is, but very few people are willing to take the risk to find out. Fascinatingly, these cultural myths have helped manage environmental sustainability in many of Zimbabwe’s wonders open to the public and Chinhoyi caves is one of them.

History
Many legends and tales have been told about the caves over the years, carrying with it great mysterious and fascinating sentiments from its visitors. Studies near and around the caves have discovered pottery and human traces dated from AD650.
The caves were used as a fortress to hold victims by a notorious individual named Nyamakwere, who would throw some of his casualties into the Pool. It was through these happenings that the cave’s pool derived their native name in the 1830’s- ‘CHIRORODZIVA’, meaning ‘the pool of the fallen’. Nyamakwere’s demise came at the hands of a Headman named Chinhoyi who later became a Chief and the namesake of the town close by- Chinhoyi. The new chief used the caves as a safe haven from violent tribes. The caves were then to be officially discovered and documented in 1887 by Frederick Courtney Selous who was a famous European hunter. The Chinhoyi caves is where the war of independence commenced in 1966 with the clash between ZANLA and Rhodesian fighters. The caves and park surrounding it, became titled a National Park in 1957 and then reclaimed to be a Recreational Park in 1975.

The Caves and the Pool
The cave system is made of limestone and dolomite, and the beauty of the caves lies not only in the crystal-clear pool, but also in the geology of the rocks. The caves are a result of a slow disintegration and is considered a dying system in a geological time-span. The main cave, known as the Wonder Hole is a result of the collapsing of a large roof which drops vertically down approximately 150 meters to the pool. The disintegration is also noticed in the pool, which has several under water passages which fascinatingly lead back to the Main pool. 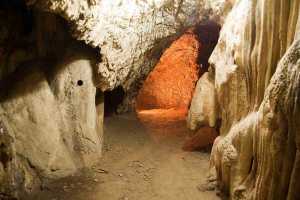 The “Pool of the Fallen’/ Sleeping Pool is contained within the largest cave in the system. The pool has a distinct and breathtaking cobalt blue appearance and has temperatures of 22-24°C all year round and is non-flowing. This, and its high visibility of approximately 50 meters deep, make the pool an exciting destination for divers throughout the year. The total depth of the pool varies according to the amount of rainfall received in each season, however, the actual depth is unknown. Highly qualified and certified divers from all over the world have attempted to reach the bottom of the Sleeping pool, but have run out of oxygen before reaching the bottom. The furthest diver as the time of this article reached approximately 135meters. 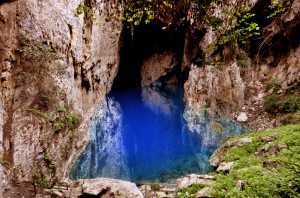 The pool can be seen in 2 ways;
As one walks through the main entrance, the man-made rocky stairs usher you down into the dark cave. Progressively steeper and rockier, the surrounding boulders aid descent as you have something to hold on to while you navigate your next step. Suddenly, a beam of light coming from the main cave roof-top is noted above the magnificent cobalt blue pool. Through this entrance, the pool is close enough to touch and is by far the best view.
Another entrance to the view of the pool is the Dark Cave which is accessed through a flight of stairs and an extremely narrow path. This cave is pitch dark and can only be walked through with the help of light bulbs at any given time. It leads to the view of the right side of the pool from a higher perspective. The route through the Dark Cave is exceedingly steep and may not be advisable for some individuals to walk through. 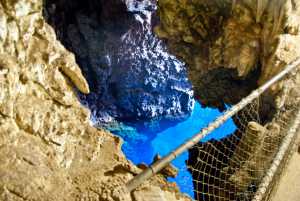 The park contains a campsite, picnic site and a restaurant open for use. The Caves make for a great stop-over on the way to Kariba. Other activities include Suba diving that can be enjoyed by divers of all qualifications accompanied by Zimbabwean registered dive club members.