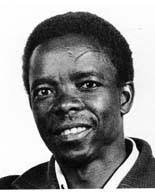 A Zimbabwean sculptor born in Salisbury, Rhodesia (Harare, Zimbabwe). He grew up in Rusape in the 1940s. Ndandarika is well-known for his 1962 piece “Bushmen Running From The Rain”. His father was a Malawian bus driver while his mother a Shona woman who was very artistic. She worked as an occasional model for the sculptor Job Kekana, also from Rusape.

Ndandarika did his higher education at a Catholic boarding school called Serima Mission in the late 1950s. Father John Groeber and Cornelius Manguma identified Ndandarika’s talent at the school and trained him, grooming this artistic fire within him. Ndandarika was trained in wood carving and drawing and he would paint several murals inside St. Mary’s Church.

In 1959 he moved to Salisbury, where he joined Frank McEwen’s Workshop School in Harare. He became one of McEwen’s top painters specializing in landscapes and witchcraft scenes. He played up that he was a sangoma’s grandson and had undergone extensive training with his grandfather. Ndandarika hid his training at Serima for years because McEwen had a preference of untrained pagan artists. Ndandarika was known for his signature way of painting as he mixed the paint on the canvas rather than on the palette, creating a highly uneven surface. In the course of the 1960s, Ndandarika moved more into sculpting after he was sent to train in the field with Joram Mariga.

His work was seen exhibitions in places like London at the Commonwealth Institute for the 1963 New art from Rhodesia, the 1964 International Art Exhibition in Lusaka Zambia, the 1968 New African Art exhibition that was organized by MoMa in New York USA and at the 1971 Sculpture Contemporaine des Shonas d’Afrique, Musee Rodin exhibition in Paris France.

The 1980s saw him exhibiting at the Zimbabwe House in London for the 1981 Retrospective Exhibition of Shona Sculpture and the 1985 Contemporary Stone Sculpture from Zimbabwe exhibition at the Irving Sculpture Gallery in Sydney Australia. In 1987 he showcased his work at the International Contemporary Art Fair in Los Angeles in the USA and in 1988 his work was shown first at the Chicago International Art Exposition in Chicago USA then at the Australian Art Expo at the Darling Harbor in Sydney Australia. One of Ndandarika’s notable works, the sculpture “Telling Secrets” was displayed on a Zimbabwean stamp that was issued to celebrate Commonwealth Day on the 14th of March 1983. In 1986 he received an award of merit from the Zimbabwe Heritage Exhibition.