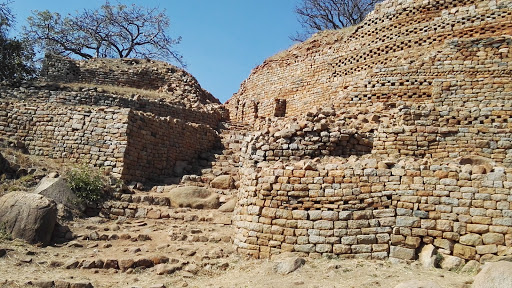 Once the capital of the Kalanga Kingdom of Butwa of the Torwa dynasty for about 200 years from around 1450 and now a national monument, Khami Ruins is located 22km west of Bulawayo in Zimbabwe. In 1986 it became the UNESCO World Heritage site. It was settled during the late Iron Age period. They further developed the architectural form of Great Zimbabwe with buildings of rough walling on which houses would be constructed. The walls are built without mortar but unlike the ones built at Great Zimbabwe, these walls have foundations built with huge blocks which would have been lifted by at least four people.

This site was founded after the disappearance of the Great Zimbabwe state. There are seven built up areas that were occupied by the royal family with an open area for the commoners. The beautifully adorned 6m high by 68m long retaining wall bears a checkers board design along its entire length. The platforms rose 2 to 7m above the ground and carried clay huts and courtyards where those of the lower status lived. There is a Christian cross believed to have been placed by missionaries.

The stone found at Khami (laminar granite) is different from that found in other areas of Zimbabwe (biotite). This stone had a mixture of dolerite which made it hard to quarry and therefore produced shapeless building stone. It thus required a lot of effort to produce enough stone to build the walls. The area surrounding the Khami ruins is hot; using building stones made the houses cooler. This is presumably part of the reason why they went through so much effort.

Archeological digs have revealed that the buildings were well planned e.g. the Hill complex which was occupied by the King. This was built up by creating terraces of rough walling then covered by quality walling of dressed stone blocks. It was decorated with herring bone, checkboard pattern and a cord pattern. They leaned the terraces inwards so that gravity would not cause collapse the walls and they had wooden poles to hold them up and probably for the guards to hold on to as they walked along the steep walls. The settlers are believed to have raised cattle as they have found cattle bones and teeth as well as a kraal on the site.

The Khami site appears to have been occupied for about 200 years until it was attacked by Changamire Dombo and his Rozvi army.