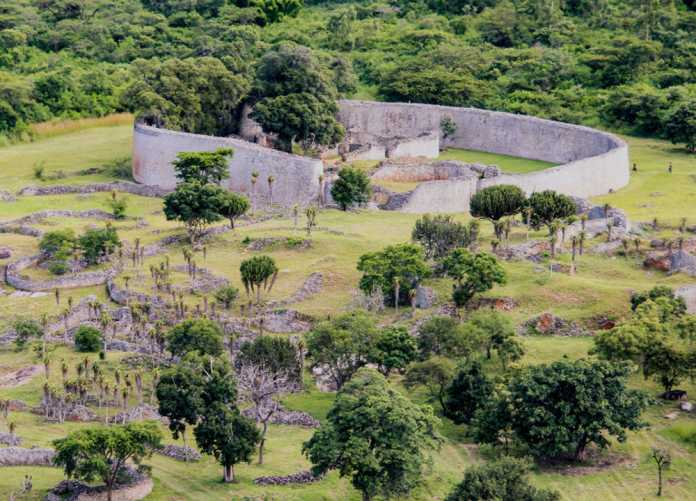 The first time visiting the ancient city of Zimbabwe will be breathtaking, it is located in the south eastern hills of Zimbabwe near Lake Mutirikwe and the town of Masvingo. It was the capital of the Kingdom of Zimbabwe during the late Iron Age. It was constructed in the 11th century and abandoned in the 15th century. The city spans 7.22 square kilometers and could have housed up to 18000 people. It is believed to have served as a royal palace for the local monarch.

The great Zimbabwe has been described by UNESCO as:

‘A testimony to the Bantu civilization of the Shona between the 11th and 15th centuries.’

‘A unique artistic achievement, this great city has struck the imagination of African and European travellers since the Middle Ages, as evidenced by the persistent legends which attribute to it a Biblical origin.’

‘The entire Zimbabwe nation has identified with this historically symbolic ensemble and has adopted as its emblem the steatite bird, which may have been a royal totem.’

The prominent features of the city are its walls some of which were over five meters high and they were constructed without mortar. The city fell into ruin when it was abandoned. Scholars believe that it was built by members of the Gokomere culture who were ancestors of the modern Shona people in Zimbabwe. They farmed the valley and mined and worked iron. The Great Enclosure has walls as high as 11metres extending almost 250metres making it the largest ancient structure south of the Sahara Desert. The ruins that survive are built entirely of stone; they span 730hectres. 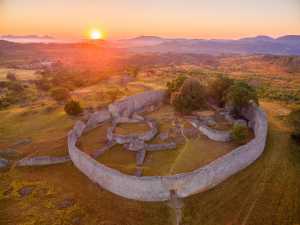 The ruins form three distinct architectural groups namely the Hill Complex being the oldest and was occupied from the 9th to 13th centuries, the Valley Complex which was occupied from the 14th to the 16th centuries and the Great Enclosure occupied from the 13th and 15th centuries.
In the Hill complex there is the Eastern Enclosure in which it is said the Zimbabwean bird stood, a high balcony enclosure that overlooks the Eastern Enclosure and a huge boulder in a shape similar to that of the Zimbabwean Bird.
The Great Enclosure is made up of an inner wall, encircling a series of structures and a younger outer wall. There is a Conical Tower that is 5, 5 m in diameter and 9m high. The valley complex is divided into upper and lower valley ruins with different periods of occupation. It is said the great Enclosure was occupied by the King. Artifacts found include figurines made from soapstone, pottery, iron gongs, worked ivory, iron and copper wire, iron hoes and bronze spearheads to name a few.
There are myths that early morning on top of one of the hills one might see a warrior possibly the royal guard looking out as he used to do when he was alive.

There is a lodge for those who want to spend a night or two taking in the ancient air of the enclosures, and guides that give you the history of the city. As well as a museum that has kept the relics that were dug up by archeologists to give you a deeper insight of what it used to be.