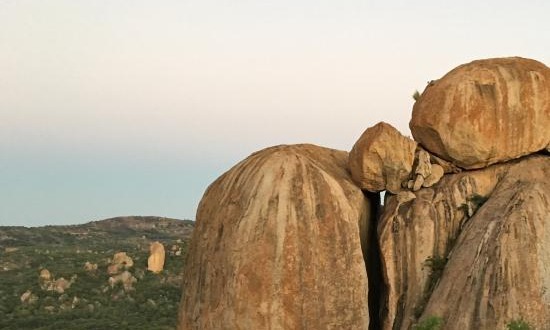 The Njelele Shrine is considered a holy and sanctified place, a rainmaking shrine located on the southwestern fringes of Zimbabwe’s Matobo National Park in Bulawayo. Njelele is derived from the Bakalanga name for an eagle, it is also known as Matonjeni in Ndebele and Mabweadziva in Shona (a name coined from rocks of water). Njelele is a sacred shrine that is part of Zimbabwean cultural heritage. It was established by a priest called Njenjema. It is believed that Mwari resides there since the Mwari cult was established there. Kings like Mzilikazi were loyal to Njelele, he would send herds of black cattle to the shrine for thanksgiving.

The presence of Mwari was heard through his tone of voice through the rocks. It is said one could hear the sound of cattle mooing and whistling from the herders. The main purpose of the shrine was for rainmaking ceremonies and thanksgiving. Rain was responsible for the sustainability of people in the pre-colonial period as agriculture was one of the bases of the economy. In times of drought and famine the people would go with the priest of the Mwari cult and they would hold a rainmaking ceremony, pleading with the spirits at the shrine to bring forth rain. They would go to the shrine with virgin girls and old women with brewed beer. They would chant songs and the priests would supplicate to the gods (Mwari). This was done until the voice of Mwari was heard.

The shrine was also responsible for fertility in human beings, couples would approach Njelele when they failed to conceive. They would do this for spiritual intervention and guidance, some would be healed instantly and others were told to visit doctors.

People were not allowed to consult Mwari without the presence of the shrine officials as these officials were knowledgeable of the laws of the shrine and of Mwari. There were gifted people who could translate the voice of Mwari. The selection of the priest of Njelele was done through possession and tests done by spirit mediums. It is believed not everyone was allowed at the shrine; only priests, messengers, dancers, girls of pre-pubescent stage and old women who were post –menopausal were allowed. Those that were not allowed were witches, wizards and thieves and if any of these people visited, they would be stoned to death. People were also not allowed to visit the shrine in large groups.

The voices of Njelele have been quiet since 1974 and it is not known if they will ever be heard again. However, the Njelele shrine is still one of the most sacred shrines in Zimbabwe.