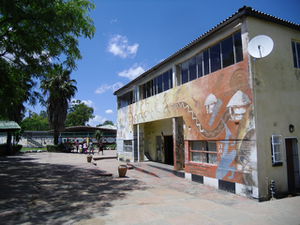 Established by Cont Mhlanga in 1981, it is also known as the Amakhosi Academy of Performing Arts. It is based in the Bulawayo township of Makokoba at the Amakhosi Township Square Cultural Centre. It is an influential cultural institution with stimulating performances that examines critical issues in politics, health, women’s rights and development within urban and rural communities.

Initially it was the Dragons Karate Club and Cont would attend theatre workshops and share the newly acquired skills with his Karate club, and eventually it became Amakhosi Productions. Productions like “Children Children”, “Book of Lies” and “Diamond Warriors” all from the year 1983 were performed in English. These were Mhlanga’s first plays which followed political themes of colonization, the theft of African’s cultural heritage and its natural wealth. In 1984 he staged plays in IsiNdebele called “Ngizozula Lawe”, followed by 1985’s “Nansi Lendoda” which won five National Theatre Organization awards. 1986’s “Citizen Mind” encouraged the revitalization of Zimbabwean traditional cultures.

Most of Amakhosi Theatrical productions brought to light issues such as the capitalist system and the repression of workers, sexual harassment of poor women, issues of crime, unemployment, corruption and suppression of women. They later spread to radio with the production “Ngokwako Sgadula” in 1990 which focused on family planning, and they had a screen play on TV called “Tshada Laye” which screened 13 episodes. Amakhosi Theatre has also brought about the rise of dancers and actors such as Alois Moyo.

By 1990 the group had grown to 110 active members and they had performed about 295 times on stage. Cont was the writer, director and producer of all the plays until he was joined by his bother Styx Mhlanga who made contributions as well.

Amakhosi has gained international recognition with and has received funding from Scandinavia through NGOs like HIVOS, DANIDA, and NORAD to support their activities. The theatre ran a one-year program that involved rural community members in the fight against HIV and AIDS through the effective use of Drama, through the Amakhosi Theatre for Community Action established in 2001.