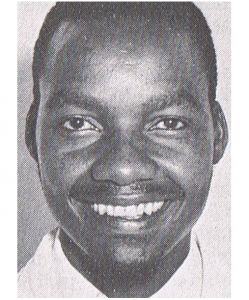 Zimbabwe’s first black medical doctor was born on the 17th of July 1927 in Rusape in the Manicaland Province. He did his tertiary education at the University of Fort Hare in Eastern Cape South Africa and obtained his degree at the University of Witwatersrand. He undertook his medical training in Durban and he returned to Southern Rhodesia (now Zimbabwe) and formed the Mashonaland Herbalists’ Association. It was an organization for n’angas, the first in Sub- Saharan Africa, recognizing traditional healers as public servants.

He did his housemanship at Salisbury Hospital (renamed Harare Hospital in 1981) and later moved to Antelope Mine Hospital near Bulawayo in July 1959, where he was a medical officer and in charge of patients of all races.

In 1961 he resigned from his post to join politics. He became vice president of Zimbabwe African Peoples Union (ZAPU) when it was formed in 1962. He travelled widely throughout the country, creating branches of the party and recruiting members, as he wanted the party to have stronger roots. Though he was involved in politics he did not neglect his practice as Dr. Parirenyatwa ran two surgeries in Salisbury (now Harare). He emerged as a leading nationalist in the area, together with Joshua Nkomo, Robert Mugabe and Ndabaningi Sithole.

Dr. Parirenyatwa was killed in car accident on the Gweru-Bulawayo road on the 14th of August 1962. His funeral was held on his father’s farm. To commemorate him, Salisbury’s Andrew Fleming Medical Centre was renamed to Parirenyatwa Hospital by the Zimbabwean government in 1980. His legacy continues through his son David Parirenyatwa who is also medical doctor.