He studied at Prince Edward School in Salisbury (now Harare). Sam is best known for his construction of the Sam Levy’s Village shopping mall in Borrowdale a suburb of Harare in 1990. He was a property developer and was known to be a self-made millionaire. He founded and chaired Macey’s Stores Limited a large supermarket group, in the 1960s. 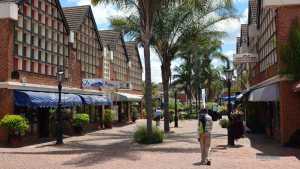 In 1973 he purchased Duly’s car showroom on Angwa Street Salisbury for US$1.5million, he then converted the site into a department store and later a shopping center, the Ximex Mall which he sold to the National Social Security Authority (NSSA) in the late 1990s.
Sam stood in the Salisbury council election in 1975 and served as a councilor for ward 8 comprising the city’s southern district of Waterfalls until 1979. Levy is reported to have built Sam Levy’s Village without municipal permission and only regularized the complex when authorities threatened to demolish it. This was according to the 2014 retrospective on his life published by the Herald newspaper.

Sam Levy’s village was designed in such a way that it has since been referred to as “Little England” as it includes buildings similar to the English cottages and a clock tower that resembles the Big Ben and originally issued its security guards with uniforms similar to those of the British “Bobbies”. Its downside was it lacked public toilet facilities but were eventually installed but by the year 2014 shoppers paid in order to use them.

Levy died from cancer at his home in the Harare suburb of Avondale on the 5th of June 2012. He was buried at Warren Hills Jewish Cemetery in Harare. Levy was survived by his wife and four children, Julia, Isaac, Maurice and Raymond and seven grandchildren. Joice Mujuru expressed her condolences to the family having been a close friend to her late husband General Solomon Mujuru. Sam had assisted the General when he was involved in a helicopter crash and broke his vertebrae when he was still in the army. Later that year he was posthumously honored with a Lifetime Achievement Award at the Victor Night Awards and recognized by the UN’s EMPRETEC program as one of the most influential Zimbabwean entrepreneurs since 1980. His eldest son Isaac took over the family business.