Popularly known for her song Ivai nesu and her impeccable talent for the Mbira instrument*, Chiwoniso continues to be a heroine to most female musicians. She was born on the 5th of March 1976 in Olympia, Washington and spent part of her life in the U.S. Half of her high school years were at the Northwest School in Seattle, Washington, until she moved to Zimbabwe and attended Mutare Girls’ High.

Coming from a musically inclined family, Chiwoniso, her 2 siblings and her father formed a Mbira group called ‘Mhuri yaMaraire’ which was a kick-start to her music career. At the age of 15 she was part of an Afro- fusion pop trio- A piece of ebony– which was the first group to fuse mbira with contemporary music in the early 1990s. This musical fusion, and how impeccably well she played the traditional instrument, became Chiwoniso’s signature through which she earned her Legend Status.

The singer, songwriter’s first album- Ancient voices– was released to international acclaim in 1997, earning her the Radio France International award for Best New Artist. This album was also nominated for Best Female Vocals of Africa for the Kora Awards in 1999 and was also in Europe’s World Music Charts.  Maraire joined a band led by guitarist Andy Brown called The Storm and together they became 1 of Zimbabwe’s greatest bands. She continued to release more albums during the years 2004, 2006 and 2008 while also being a member of a multinational, all-women band. The group was befittingly named Women’s Voice and its original members were from Tanzania, USA, Israel, Algeria, Zimbabwe and Norway.

Apart from being a songbird, Chiwoniso took interest in film, having worked on the soundtracks for movies and documentaries by different Zimbabwean writers and producers. Chiwoniso sadly passed away on the 24th of July 2013, at the age of 37. She spent 10 days in the South Medical hospital in Chitungwiza, suffering from chest pains and then later died from pneumonia. She was buried at her rural home in Chakohwa village in Mutambara. Her death came a year after the passing of her ex-husband Andy Brown and the couple had 2 daughters, Chengeto and Chiedza Brown.

Chiwoniso is remembered through her work through the years:

The mbira is an African musical instrument, traditional to the Shona people in Zimbambwe. It is a wooden soundboard with attached thin metal keys which are played by the thumb. It is sometimes known as a ‘thumb piano’(The Mbira Instrument: History & Music) 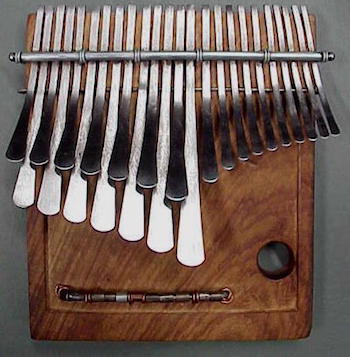