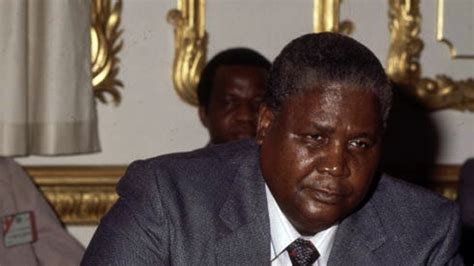 Joshua Nkomo, who died aged 82, was the first modern nationalist leader in white-ruled Rhodesia.
He was a giant, both politically and physically, and he dominated the Zimbabwean political and nationalism arena for half a century. Known affectionately as Umdala Wethu – our old man – his life was marked by the struggle for independence and the introduction of black majority rule for Southern Rhodesia, now Zimbabwe.

Early Life and career
Joshua Nkomo was the third child in his family, born in 1918 into a middle class status as both his parents served as Missionaries in Matebeleland. He attended Tsholotsho Primary school and moved into the carpentry trade upon completion. He went on to learn the carpentry trade which he proceeded to teach at the Manyame School in Kezi in the 1940ès. During this time, Nkomo decided to save money in order to further his education in South Africa where he obtained a Bachelors in Social Work from Adams College. While in school, Nkomo met Nelson Mandela and other regional nationalist leaders, which marked an intensification of his desire to change for his country. He returned to Bulawayo in 1948 and became a trade unionist, campaigning for better pay and conditions for black railway workers.

Political career
The leader of a number of organisations during the 1950s and 1960s – which were all banned by the British colonial authorities – Joshua Nkomo founded the movement which became most associated with his name, ZAPU, in 1962, but the movement was banned immediately.
Mr Nkomo came from Zimbabwe’s Ndebele minority, and a year after Zapu’s foundation there was a split with the nation’s Shona majority under the leadership of Nkomo’s former lieutenant, Robert Mugabe. Between 1964 and 1974, both rivals were detained for long periods by the Rhodesian government of Ian Smith, who declared independence unilaterally from Britain in 1965.

On his release, Mr Nkomo went to Zambia, from where he fought for Zimbabwean independence as the head of Zapu and its Zimbabwe People’s Revolutionary Army, which was backed by the Soviet Union. The rivalry between the Zapu and Zanu leaders continued throughout the war. The struggle for majority rule ended with the Lancaster House accord, paving the way for elections in 1980. It was then that Joshua Nkomo’s cherished ambition of becoming Zimbabwe’s first black president was dashed. His party trailed Mugabe’s by 57-20 seats in the new 100-seat parliament.
Mr Nkomo made no secret of his bitterness at the defeat. He joined the first Mugabe coalition in the powerful Home Affairs ministry, but there was no harmony. In 1982 ZAPU was accused of plotting a coup and Nkomo was fired, had his passport was revoked, and was restricted to Bulawayo. Mistrust between the two parties escalated, leading to a near civil war in the first half of the 1980s. Thousands of civilians in Matabeleland were killed by government forces, including a North Korean-trained Fifth Brigade.

It was not until 1987 that the differences were patched up, with Mr Nkomo becoming one of two vice-presidents. Zimbabwe became a one-party state, with Mr Mugabe’s organisation effectively swallowing up the much smaller Zapu.
As vice-president, Mr Nkomo’s career followed a steady decline. Many in Matabeleland saw him as having sold out, and his failing health began to take a toll on him. Nkomo kept up his attacks on whites for not becoming assimilated as “true Zimbabweans”, while his conservative attitudes were ill-suited to discourse with women seeking equality in a traditional African society.
In his last years, Mr Nkomo’s deteriorating health led to mounting speculation about his possible successor, with fears of heightened ethnic tension between the Ndebele and the Shona. It may have been partly with this in mind that Mr Mugabe paid such a generous tribute to his old rival, describing him as a great man, a comrade and a compatriot. BBC

Today Mr Nkomo is remembered as a National hero and received ‘Hero’ status, as he was laid to rest at the National Hero’s Acre in Harare. He had impeccable leadership and a resilience to serve his country politically during and after colonial times. He encouraged new ideas and development from young people such as Econet’s Founder Strive Masiyiwa and since then, there have been several scholarships named after Joshua Nkomo . A statue of the former Vice-president stands in the Bulawayo city center today in commemoration of ‘uMdala wethu’. 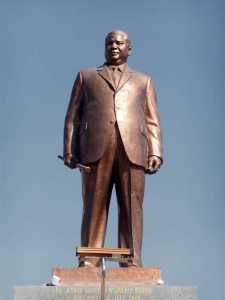