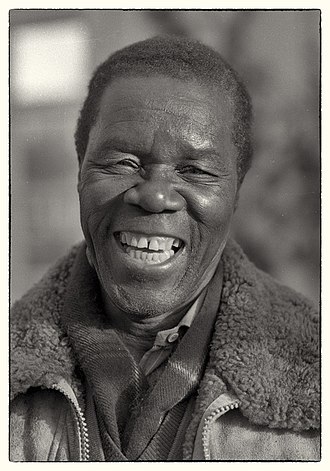 Joram Mariga has been called the “Father of Zimbabwean Sculpture” because of his influence on the local artistic community starting in the 1950s and continuing until his death in 2000. His sculptural movement is commonly known as “Shona sculpture”, although some of its recognised members are not ethnically Shona.

He was born near Chinhoyi, (formerly called Sinoia) in what in 1927 was Southern Rhodesia. He was the son of a sangoma, and both of his parents were artistic. His father and elder brothers (Copper and Douglas) were expert woodcarvers, while his mother made pottery. All of them sold their work to members of the community. Aged eight or nine, he started to carve wood, and at school he joined wood working classes. Joram attended secondary school in Goromonzi and studied at the Waddilove Institute. He qualified as an agriculturist and got a job at Agritex. His career as a sculptor in stone began in 1957 when he discovered long sought-after caches of green Inyanga (Moon) soapstone while leading a roadbuilding crew in eastern Rhodesia. Unaware of the importance of his find, he started to use it to produce utensils and small figures. He also began teaching members of his road building crew to carve the stone using woodcarving tools.

Mariga was introduced to Frank McEwen, the founding director of the new Rhodes National Gallery. The Gallery was meant to bring non-African art to Harare but when McEwen created the Workshop School to encourage new work in painting and sculpture, the local community of artists discovered their talents for stone sculpture. McEwen and Mariga were soon in regular contact: Mariga exhibited at the Gallery extensively from 1962 but always worked on his own in his spare time and later at his studio in Greendale, Harare.

After 1962 Mariga abandoned the use of soft soapstone and began to use larger, harder blocks of serpentine that he found in the course of his work. He also began working with new tools. As his technique developed, he taught numerous others what he had discovered. These other artists included his former roadbuilders, as well as artists such as Joseph Ndandarika who were sent to train with him by McEwen.

By 1967, Joram was arguably the leading Zimbabwean sculptor, and his compatriots followed his lead, working in newer stones such as serpentine and springstone that he pioneered. One of his sculptures was depicted on a Rhodesian postage stamp, part of a set issued on 12 July 1967 to commemorate the Tenth Anniversary of the opening of the Rhodes National Gallery.

In 1969, McEwen took a group of works to the Museum of Modern Art in New York and elsewhere in the USA, to critical acclaim. That same year Mary, his wife, established Vukutu, a sculptural farm near Inyanga, where the artists could work. Mariga found the location for the McEwens and was promised leadership of the artistic commune. However, the McEwens suspected him of harboring ZANU insurgents and transferred him to a distant region. Sylvester Mubayi was installed as the leader.

While many of the artists at Vukutu went on to have successful careers, Mariga’s career suffered after his transfer to Chipinga. In this region he quickly ran out of stone, and found nothing available locally to sculpt with. Depressed after his betrayal by the McEwens, his artistic output largely consisted of elaborate woodcarvings made for his own household. He would not resume stone carving until a triumphal return in the late 1980s. Mariga was a member of the National Gallery of Zimbabwe’s Board of Trustees from 1982 till 1993.

Mariga was married four times. With his first wife, Doreen, he had a daughter, Mary. His second wife was Philipa, the mother of Owen, Richard and Robin. Anne was his third wife who was the mother of Walter, Daniel, Aaron and Jay. In 1976, Mariga married Maud but they had no children.

Besides being a sculptor, Mariga was a teacher, counting among his students John and Bernard Takawira and Crispen Chakanyuka, (all his nephews), Bernard Manyadure, Kingsley Sambo, and Moses Masaya. He would also take students from further afield, generally while travelling.

In 2000, he gave a filmed interview with Jonathan Zilberg, in which he gave an account of his life and work. Joram Mariga died in December 2000 soon after arrival at Bonda Mission Hospital, following a car accident.