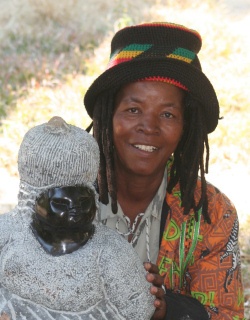 Defying the male dominance of the sculpting world, Colleen Madamombe was a female sculptor whose work showcased themes of womanhood, motherhood and tribal Matriarchy. Born in 1964 in what was then Salisbury, Rhodesia (Harare, Zimbabwe) she did her secondary education at Kutama from 1979 to 1984. Madamombe got her diploma in Fine Arts at the BAT Workshop School of the National Gallery of Zimbabwe from 1985 to 1986. She married Fabian Madamombe in 1986 and they had seven children.

At first, she specialized in drawing and painting but she started stone carving in 1987 after helping her husband with his sculpting at Chapungu Sculpture Park. Observing ant, bees, butterflies and caterpillars inspired some of her early work. Madamombe became known for depicting Shona women and their culture in her art. Her female figures became a symbol of womanhood in Zimbabwe. These figures were adopted by the Zimbabwean International Film Festival as the trophy award for female winning entrants.

She was named Best Female Artist of Zimbabwe three times. Madamombe predominantly worked with Springstone but also used Opal stone. Colleen’s work has been exhibited and sold outside Zimbabwe, for example, her work was shown in Botanical Gardens in the UK and the US. Her work was featured in the catalogue “Chapungu: Culture and Legend – A Culture in Stone” for an exhibition at Kew Gardens in 2000. In 2004 her and her husband’s work was showcased on exhibition at the Botanical Garden in Berlin.

Colleen Madamombe died on the 31st of May 2009 and was buried near her rural home in Zvimba. In 2010 an exhibition of her life work was showcased at the National Gallery of Zimbabwe.