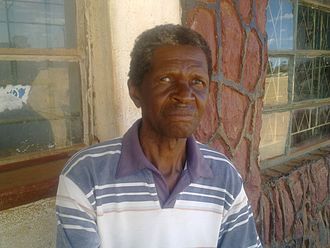 Morgan Mahanya is a novelist and playwright who has published 13 books since 1976, eleven in Shona and two in English. He is one of the pioneers in detective stories in the Shona language and has also written books on the Zimbabwe Liberation War such as “Chidamwoyo” and “Zvinoyera” which were written in Shona and “The Wound” written in English.

Mahanya was born on the 30th of June 1948 in Zimuto Mission, Masvingo in a Shona speaking family. His father was a headman in the Mahanya Village, Zimuto. Morgan studied at Mutatiri Primary School and then Zimuto Mission for his secondary school. He taught at Sherwood primary school near Kwekwe in the years 1968 to 1970. In 1972 he joined the Mambo Press as a short story freelance writer and contributor. He also worked for Moto Magazine. His novel “Zvinoyera” was a runner up in the Shona category of the 1991 Zimbabwe Literary awards.

Morgan is married to Rebecca and they have 4 daughters. The last born, Grace,  is a budding novelist. Mahanya and his wife live in Zhombe, Empress Mine Ward in Totororo village.